First Freedom Bank’s long-time Personal Banker Christy Trammel has been promoted to Shareholder Services Representative, announced John Lancaster, Chairman and CEO. Trammel will continue to operate out of the company’s headquarters in Lebanon.

“Christy Trammel has had a very successful career here at First Freedom,” said Lancaster. “She understands and embraces our customer-focused standards. I am pleased to expand on her responsibilities with this promotion to Shareholder Services Representative,” he concluded.

First Freedom takes great pride in providing the highest level of quality customer service. As our Shareholder Services Representative, Trammel will be the bank’s primary contact for existing shareholders and will assist in maintaining the company’s shareholder records.

Trammel has been in banking for 22 years and has been with First Freedom Bank since its inception more than 11 years ago. In 2013, she was recognized for her outstanding service with the bank’s highest honor, the Red Carpet Service Award. Trammel is a graduate of Lebanon High School and has taken many banking and compliance classes through the Tennessee Banker’s Association and/or Volunteer State Community College.

A native and resident of Lebanon, she and her husband, Ryan, have two children. She has been actively involved in various charities in Wilson County and attends Cedar Creek Baptist Church in Lebanon.

On March 10, 2017, the Sycamore 4th graders that passed their reading requirements for the year participated in Bank Day at First Freedom Bank's Cookeville office.

Pictured above is Ladell Medley, Vice President and Cookeville Office Manager, giving a tour to the students.

As a Portfolio Manager for First Freedom, John Hawkins is responsible for managing a sizeable portfolio of loans in many different industries. He has ten years of banking experience and has been with First Freedom since February of 2014.

“John is very deserving of this promotion,” said Lancaster, “He governs a significant portfolio and manages it with a high level of accuracy and great detail. John’s many years of community banking experience gives him a great foundation for this significant role with First Freedom.”

Hawkins volunteers in a number of community organizations, including Sherry’s Run, Relay for Life, and Jere’s Ride. He also serves as a board member for Fellowship of Christian Athletes (FCA).

Originally a resident of Gainesboro, Hawkins now resides in Lebanon with his wife, Kayla. They are expecting their first child in August. Hawkins is a member of College Hills Church of Christ.

Phillip Vance has been employed with First Freedom since July of 2014. As a Relationship Manager, he will continue to be responsible for managing existing customer loan and deposit portfolios, developing new customer relationships, underwriting loans for approval and originating new loans.

“We are excited about Phillip’s promotion and the role he plays in our bank and our community,” said Lancaster, “He is very intelligent, has the customer’s best interest at heart, and is creative in the way he approaches his customer’s needs. We are honored to have Phillip on the First Freedom team. “

Vance is a 2014 graduate of Tennessee Technological University with a Bachelor of Science Degree in Accounting. He has extensive involvement in the community, including participating in Habitat for Humanity Builds and serving as the Treasurer for the Little Lights Pre-School at Maple Hill Church of Christ. He is currently the Fundraising Coordinator for the First Freedom Bank 2017 United Way Campaign and is serving on the 2017 Allocation Panel for Wilson County United Way. Additionally, Vance is a member of the Lebanon Breakfast Rotary Club and is an upcoming board member.

Vance resides in his hometown of Lebanon with his wife Emily and daughter, Hazel. He is a member of Maple Hill Church of Christ.

“Kaitlin has adapted extremely well to the First Freedom system, having progressed from Customer Service Representative to Customer Service Representative Manager, and now to Personal Banker. She is a valued member of the Providence Office, having worked at this location for the past 4 years. Kaitlin provides excellent customer service and always greets her customers with a warm smile and friendly hello. We are proud to have Kaitlin as a member of the First Freedom team,” said Beavers.

Kaitlin has been employed with First Freedom since 2013, when she started as a Customer Service Representative before being promoted to Customer Service Manager in 2015. Overall Kaitlin has more than nine years of sales and customer service experience.

Wattenbarger is originally from Hermitage, where she still resides with her husband Joshua. They are members of Crosspoint Church in Nashville. Active in the community, Wattenbarger has been the First Freedom Team Manager for Wilson County Relay for Life in each of the last four years.

“Since joining the bank Sarah has already served our company in several capacities, most recently as CSR Manager and Training Coordinator in the Lebanon office. Sarah has a proven track record of handling additional duties in a prompt, efficient, and professional manner. She will now assume additional responsibilities for marketing and customer service. Sarah is an asset to our organization, and we are proud to have her on the First Freedom team,” said Beavers.

Sarah has been employed with First Freedom since 2015, when she started as a Customer Service Representative before being promoted to Customer Service Manager that same year. Overall, Sarah has seven years of customer service experience.

Poss received a B.S. in Anthropology, with a minor in Spanish and Latin-American studies, from Middle Tennessee State University in 2014. A native of Detroit, Michigan, Sarah has been a resident of Wilson County for fourteen years.  She currently lives in Watertown with her husband Justin.

First Freedom Bank has promoted Nicole Frank to Mortgage Specialist, announced J.B. Owens, Senior Vice President and Director of Commercial Banking. In her new position she is responsible for both new mortgage processing and originating, and will be working with realtors and individuals on their home loan needs.

“Nicole has been a valuable addition to our bank and we are excited about her new opportunity with our mortgage team. She puts an emphasis on customer satisfaction and does so while working extremely well with her coworkers. We look forward to seeing her grow even more in her new position and are proud to have Nicole on our team,” said Owens.

Nicole has been with First Freedom since September of 2015. She has over 7 years of total banking experience with Wells Fargo and Quad City Bank & Trust in her home town of Andalusia, Illinois. She then worked with The Bank of Nashville after relocating to Hermitage in 2012 with her husband, Derek.

"Keleigh is a great addition to our Mount Juliet office. She possesses excellent customer service skills and always greets the customers with a smile. We are excited to have Keleigh as a member of our First Freedom team," said Beavers.

Keleigh was born in Hendersonville and moved to Springhill, Florida, when she was a small child. She returned to Middle Tennessee when she was 17, and now resides in Mount Juliet. Keleigh is a graduate of Wilson Central and a member of United Church in Gallatin. She also volunteers her time at a nursing home in Mount Juliet.

This community baby shower  is open to the public and is an opportunity to talk to parents about car seat safety, crib safety and safe sleeping habits. First Freedom donated one of the door prize that was given to the families in need.

Ladell spoke to about 75 students of different grades.

Main topics were banking, education requirements to get a job in the banking world, jobs and education opportunities, benefits and motivational speech to continue striving in school.

Ladell did a great job keeping the students focused and shared some of his personal work experiences, giving meaningful advice.

In honor of ten years of service in the Wilson County community, First Freedom Bank is spotlighting ten worthy community service organizations, and donating in support of their efforts. In November, First Freedom donated $1,000 in support of Big Brothers of Mt. Juliet. Big Brothers assists needy families in West Wilson County with food and basic necessities; they will have a toy store for Christmastime for families in need of gifts.

In honor of ten years of service in the Wilson County community, First Freedom Bank is spotlighting ten worthy community service organizations, and donating in support of their efforts. In October, First Freedom donated $1,000 in support of Wilson County Court Appointed Special Advocates (CASA). CASA provides trained volunteers who advocate in court for the stability and healthy development of abused and neglected children. CASA volunteers remain with their assigned case until the child can be returned home, is adopted, or other permanent arrangements are made.

In honor of ten years of service in the Wilson County community, First Freedom Bank is spotlighting ten worthy community service organizations, and donating in support of their efforts. In September, First Freedom donated $1,000 in support of the Mt. Juliet Help Center. The Help Center provides emergency food and utility assistance to citizens in Mt. Juliet and west Wilson County.

In honor of ten years of service in the Wilson County community, First Freedom Bank is spotlighting ten worthy community service organizations, and donating in support of their efforts.  In August, First Freedom donated $1,000 in support of Wilson Books from Birth. Wilson Books from Birth partners with the Governor's Books from Birth Foundation to make the Dolly Parton Imagination Library available to every child under age 5 in Wilson County. Children receive a new, age-appropriate book each month free of charge.

In honor of ten years of service in the Wilson County community, First Freedom Bank is spotlighting ten worthy community service organizations, and donating in support of their efforts.  In July, First Freedom donated $1,000 in support of the Mt. Juliet Senior Activity Center.  The Center offers more than 80 programs in arts & crafts, drama and music, recreation, wellness, special events and community service.  It is currently raising funds for a new, one-level building that will be more than double the size of the current Center. 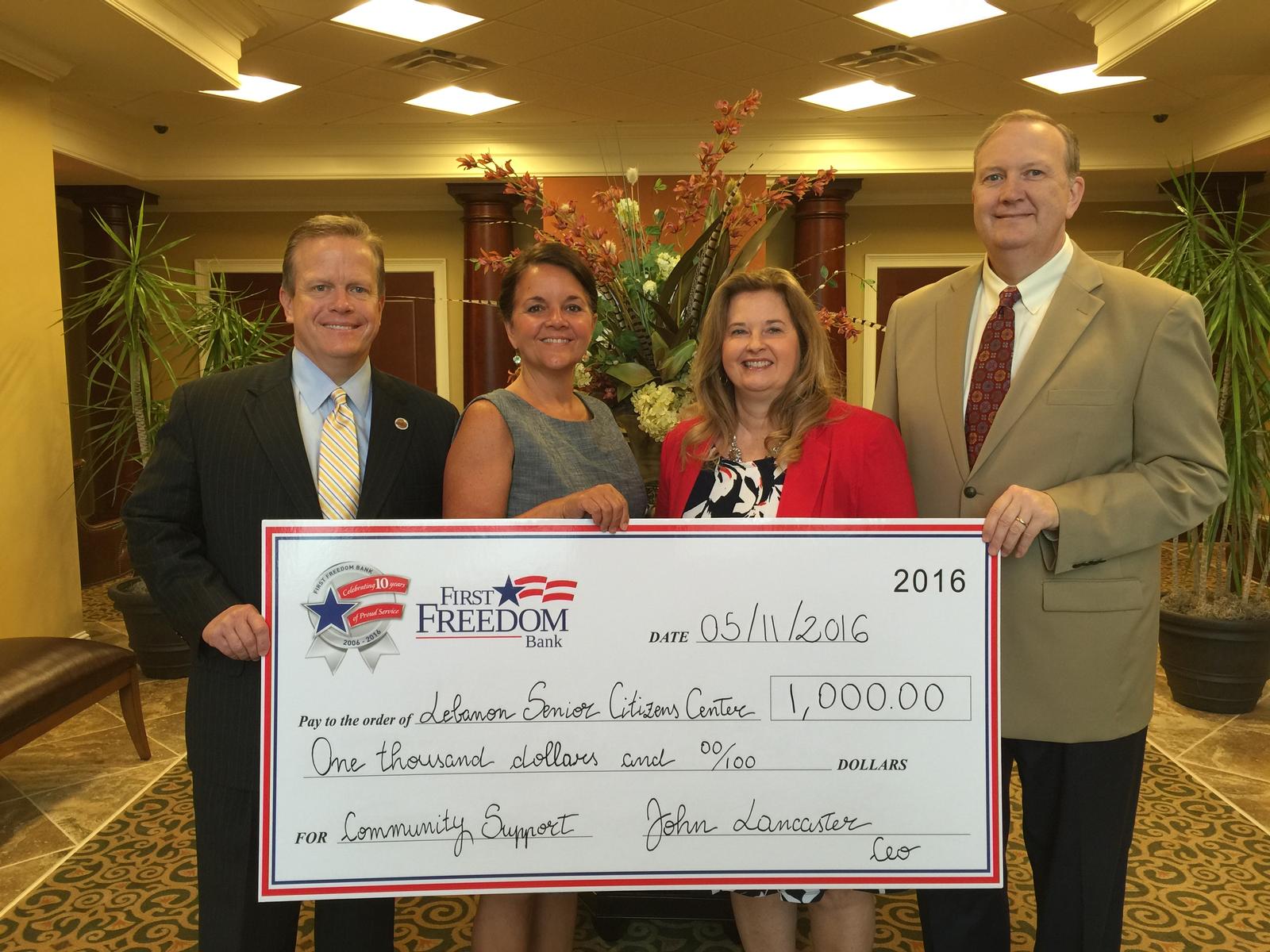 In honor of ten years of service in the Wilson County community, First Freedom Bank is spotlighting ten worthy community service organizations, and donating in support of their efforts.  In June, First Freedom donated $1,000 in support of the Lebanon Senior Citizens Center.  The Center offers a wide variety of physical activities, educational opportunities, support groups, organized trips, and lunches to attendees as well as those who are homebound and unable to cook. The Center is currently raising funds to expand its facility. 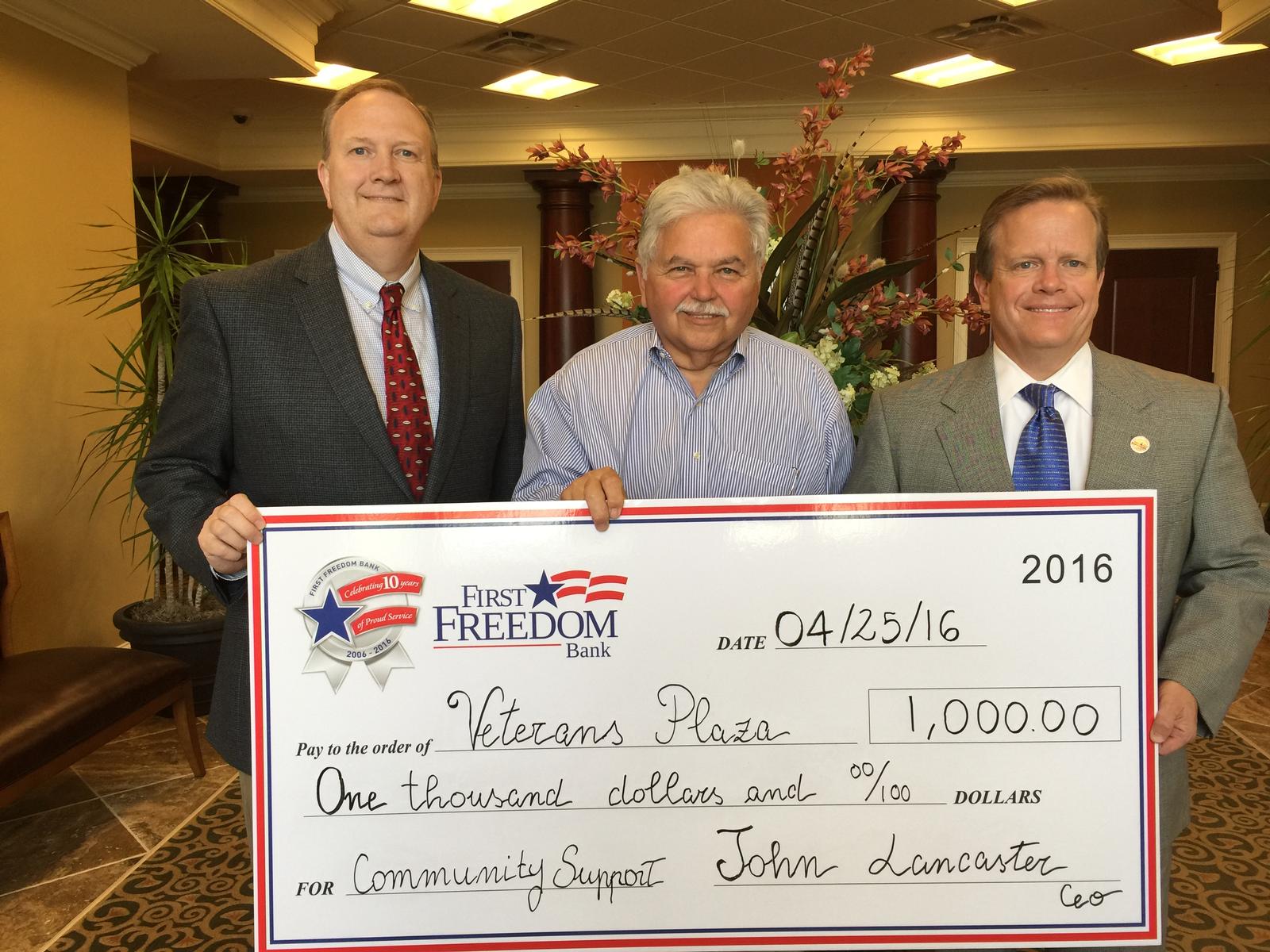 In honor of ten years of service in the Wilson County community, First Freedom Bank is spotlighting ten worthy community service organizations, and donating in support of their efforts.  In May, First Freedom donated $1,000 in support of the Wilson County Veterans Plaza. Located next to the Wilson County Courthouse, the Veterans Plaza is a tribute to those who served the United States both past and present. Phase One of the Veteran's Park was completed in 2014; the park includes an eternal flame, POW-MIA monument, a star-shaped fountain, monuments for all branches of the military and several flagpoles. Phases two and three will include offices and a museum.

Pictured at the check presentation are (left to right) John Lancaster, Chairman and CEO of First Freedom, Bernie Ash from the Veteran's Services Office and John Bradshaw, President and COO of First Freedom Bank.